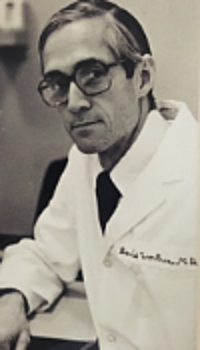 Lottie Worthen actively served her community and church in Utah County, and proved ahead of her time, graduating from college and earning a Master's degree in Education.

George W. Worthen, Jr., born in 1886, graduated from BYU High School in 1904, Brigham Young University in 1912, and Boalt Hall law school at University of California, Berkeley in 1916. He worked as an attorney in private practice in Idaho and Utah for several years before becoming a judge in Utah County, and then an Associate Justice of the Utah Supreme Court.

David Worthen worked at a service station (we call them "gas stations" now, but back then they really were "service" stations) during high school. He served as student council president during his senior year of high school.

He attended Brigham Young University for two years, then transferred to the University of Utah, where he graduated in 1958. He played drums in a jazz band throughout college.

The Navy was experiencing an acute shortage of psychiatrists at the time. My father volunteered to complete intensive psychiatry training at Bethesda Naval Hospital, where he was billeted for six months, coinciding with the Cuban missile crisis, a stressful time for all service members and their families.

After the Bethesda training, he worked primarily in psychiatry back at Oakland Naval Hospital.

David M Worthen MD began his VA career at the Gainesville, Florida Veterans Administration Hospital in 1969, where he was Associate Professor in Ophthalmology, University School of Medicine. He earned a Master's degree in education from the University of Florida in 1974.

Here is a wonderful tribute to my father from esteemed ophthalmologist Dr. Stuart Fine:

I was accepted at three [ophthalmology residency] programs and chose the University of Florida in Gainesville. I should mention that I interviewed there in February when it was freezing cold in Virginia. In Florida, everyone was wearing short sleeve shirts. More importantly, I liked the principal faculty in Florida: Herb Kaufman, MD, and Mel Rubin, MD.

During my first year there, David Worthen, MD, joined the faculty after completing his residency at the Mass Eye and Ear. Dave was the whole package: compassionate physician, kind and capable teacher, superb surgeon, insightful investigator, and a friend to the residents. His untimely passing from ALS was a huge loss not only to his family and friends, but to all of ophthalmology.

David M Worthen MD served as Chair of Ophthalmology at the University of California, San Diego, UCSD School of Medicine from 1974–1980. He worked 5/8 time on the medical staff at the San Diego Veterans Hospital in La Jolla, adjacent to UCSD.

This arrangement—working 5/8 time for the VA and 3/8 time as medical school faculty—exemplifies the ingenious program VA launched in 1946 to offer training, research, and employment opportunities to physicians in collaboration with leading medical schools around the country.

Medical schools and teaching hospitals have partnered with the Department of Veterans Affairs (VA) for over 75 years, dating back to the end of World War II. The VA is an essential part of physician training in the U.S. and the partnership between academic medicine and the VA has helped shape the way doctors are trained in this country. Approximately 70% of all U.S. physicians complete at least part of their training in VA facilities.

In 1980, David M Worthen MD was appointed Assistant Chief Medical Director for Academic Affairs, Veterans Administration Central Office in Washington, D.C. He served in this role until 1987, when he retired due to the debilitating effects of amyotrophic lateral sclerosis (ALS). 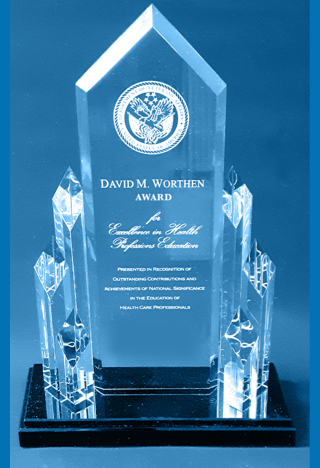 The VA kindly named an award after my father, the David M Worthen Award for Academic Excellence, now expanded to honor three recipients each year, and known as the David M. Worthen Awards for Excellence in Health Professions Education.

Dr. Worthen developed symptoms of amyotrophic lateral sclerosis (ALS) in late 1986 with the disease progressing rapidly and resulting in his death on 15 April 1988.


Inside the Diagnosis by David M Worthen MD

"The beginning was innocent. In July 1985 I received a shock from a hand-held electric drill. Within a week I'd recovered and felt fortunate to be alive.

But this minor accident heralded a permanent change in my life. I passed through the transparent curtain that separates physician from patient: I moved inside the diagnosis."


The Search for Hope in the Shadow of Death

The beginning was innocent. It was a warm day in July, and I had gone for my usual 10- to 12-mile Saturday run along the river. When I returned, I went for a swim and then began doing small chores around the pool. One of those involved replacing the axle on a chaise longue. The hole in the frame needed to be enlarged, so I bought an electric drill from the workshop and plugged it into an outlet at the edge of the patio. Using my left hand, I began to drill the opening larger.

Suddenly, the drill twisted, trapping my hand when the electric cord pulled tight. That same pull stripped the wires inside the aluminum casing of the drill, exposing the wires to the drill's frame and shorting through me to the ground.

My left arm and leg immediately went into a spasm, and I called out to my son, who was standing on the other side of the pool. Seeing what happened, he ran over and jerked the cord from the outlet, and I slumped to the ground. My first sensation was of lightheadedness. I'm sure I had a brief fainting spell but did not totally lose consciousness. My left arm hung limp at my side and felt numb and heavy.

The Wilmer Eye Institute has presented the David Worthen Memorial Lecture every year since 1988.

Assistant professors who are also juggling clinical and administrative duties can face a lack of time and funding for their research, which can slow their career growth in academic medicine. Jonathan Javitt, M.D., M.P.H., who was first appointed to the faculty at Wilmer by Arnall Patz, M.D., in 1987 and now serves on the adjunct faculty, wants to address this challenge with the Jonathan and Marcia Javitt Rising Professorship. It offers a seven-year program that will provide training and support to help accelerate the careers of Wilmer’s next generation of leaders.

In the 1990s, Javitt benefited from similar support when former Wilmer professor David Worthen, M.D., recruited him to lead the Worthen Center for Eye Care Research at Georgetown University Medical Center. (He continued to serve on the faculty at Wilmer while also on the faculty at Georgetown.) Javitt’s role at the center, along with financial support from the National Institutes of Health and private foundations, gave him the time and resources to conduct the first formal health economics and outcomes research in ophthalmology. 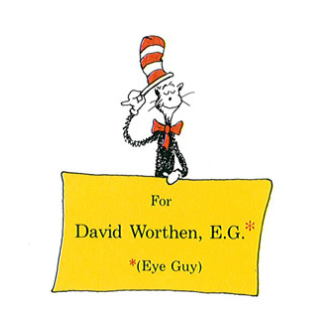 Ted Geisel, also known as Dr. Seuss, dedicated his book, I Can Read with My Eyes Shut! to David M Worthen MD, or in Dr. Seuss language, David Worthen, E.G.

According to DrSeussArt.com, “I Can Read with My Eyes Shut! was written and illustrated while Ted Geisel was in the midst of a five-year series of cataract surgeries, lens implants, and treatments for glaucoma.”

And: “Ultimately, he dedicated I Can Read with My Eyes Shut! to his ophthalmologist, ‘David Worthen, E.G.* (Eye Guy).’ Ted admired and respected Dr. Worthen, eventually including him in his list of the 65 people who ‘mean everything to me.’”


Note: The images of Dr. Seuss book covers (below) link to their pages on Open Library, where you can borrow and read digital versions of books at no cost. 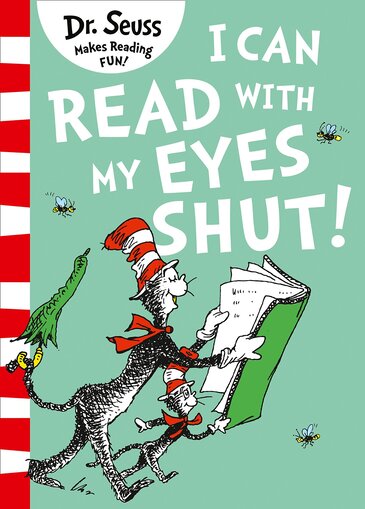 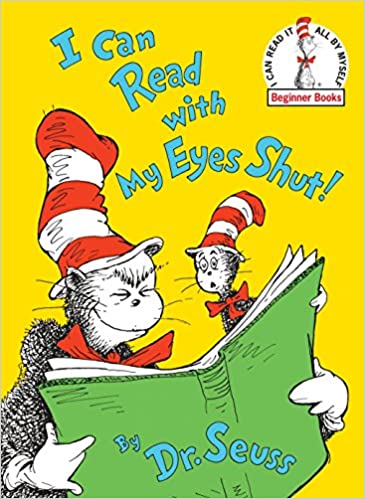 Note: The images of Dr. Seuss book covers (above) link to their pages on Open Library, where you can borrow and read digital versions of books at no cost. See the Open Library FAQ for answers to most questions.

"Open Library is an initiative of the Internet Archive, a 501(c)(3) non-profit, building a digital library of Internet sites and other cultural artifacts in digital form."


What Do You Think?

Image of the Google sign-in icon

If you would like to comment, ask questions, or offer suggestions about this page, please feel free to do so. Of course, keep it clean and courteous.

You can leave an anonymous comment if you wish–just type your first name.

If you want to receive an email when someone replies to your comment, click the icon on the lower right of the comment box to use Google Sign-in. (Your email remains private.)

Important: Do not type your email address or other identifying information into your comment as it will appear on the Internet for everyone to see ... and for spam bots to harvest so that spammers can sell your email address to other spammers.